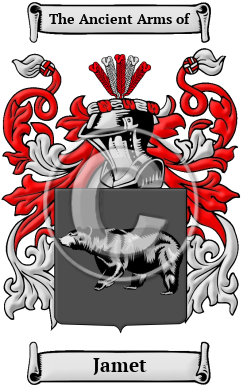 The Jamet family can find its origins within the landscape of Medieval France, particularly in that coastal region once known as Normandy. Their name is derived from the given name Binyamin, which means the son of the south, comes from The Bible, which tells that Benjamin was the youngest son of Jacob and the father of one of the twelve tribes of Israel.

Early Origins of the Jamet family

The surname Jamet was first found in Normandy (French: Normandie), the former Duchy of Normandy.

Early History of the Jamet family

The many different spellings of French surnames can be partially explained by the use of local dialects and by the influence of other languages during the early development of the French language. As a result of these linguistic and cultural influences, the name Jamet is distinguished by a number of regional variations. The many spelling variations of the name include Benjamin, Jamin, Jamine, Jaminet, Jamet, Jammet, Jammes, Jamme, Jameton, Jamot and many more.

Notable amongst the family in this period was many individuals mentioned in the Armorial documents of 1696, around Alençon. Dom Nicolas Jamin, born in Dinan in 1711, was a theologian. Pierre-Charles Jamet, born in Louvières in 1701, became a financial assistant in Paris in 1723 and first assistant of the Indes Company in Lorient in 1735. François-Louis Jamet (junior), brother of the former, was a...
Another 64 words (5 lines of text) are included under the topic Early Jamet Notables in all our PDF Extended History products and printed products wherever possible.

Migration of the Jamet family

Approximately 110 years after the first landings by Cartier, there were only about 300 people in Quebec. France gave land incentives for 2,000 migrants during the next decade. Early marriage was desperately encouraged amongst the immigrants. The fur trade attracted migrants, both noble and commoner. 15,000 explorers left Montreal in the late 17th and 18th centuries. By 1675, there were 7000 French in Quebec. Migration to New France (Quebec) continued from France until it fell in 1759. In the year 1675 the Acadian presence in Nova Scotia, New Brunswick and Prince Edward Island had reached 500. In 1755, 10,000 French Acadians refused to take an oath of allegiance to England and were deported to Louisiana. The French founded Lower Canada, thus becoming one of the two great founding nations of Canada. The distinguished family name Jamet has made significant contributions to the culture, arts, sciences and religion of France and New France. Amongst the settlers in North America with this distinguished name Jamet were 70 individuals who arrived from France onto Canadian shores between 1600 and 1900. Among them, Pierre Jamme married in Lachine, Quebec in 1690; Jean Benjamin married in 1711.