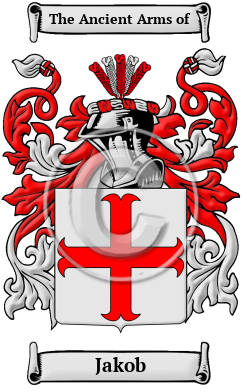 Early Origins of the Jakob family

The surname Jakob was first found in Silesia, where the name was an integral part of a feudal society which would shape modern European history. Many prominent branches of the family would strive to make this name renowned as they contributed to the social, economic and political affairs of the region. In the Middle Ages, the name referred back to the Apostel Jacobus, whose grave in Spain was a popular goal for pilgrimage. These pilgrims from Germany became known as "Jacobsbrueder" (Jacobs-brothers).

Early History of the Jakob family

Notables of the period with the surname Jakob were Gunther Jacob (1685-1734), who was a Bohemian composer. A Benedictine monk in Prague, he was known for his 30 masses, four oratorios, and 100 other sacred works. Friedrich Heinrich...
Another 38 words (3 lines of text) are included under the topic Early Jakob Notables in all our PDF Extended History products and printed products wherever possible.

Jakob migration to the United States +

Jakob Settlers in United States in the 18th Century

Jakob Settlers in United States in the 19th Century