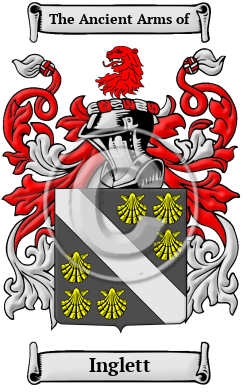 The name Inglett was spawned by the ancient Anglo-Saxon culture that ruled a majority of Britain. It comes from the baptismal name Inglet. The personal name Inglet was originally derived from the Old German word ingel which means angel. [1] As the naming tradition grew in Europe baptismal names began to be introduced in many countries. Baptismal names were sometimes given in honor of Christian saints and other biblical figures. There are very few Christian countries in Europe that did not adopt surnames from these religious figures.

Early Origins of the Inglett family

The surname Inglett was first found in the Hundredorum Rolls of 1273 where William Ingelot, Oxfordshire; and William Hingelot, Norfolk were recorded. [2]

Early History of the Inglett family

Inglett has been spelled many different ways. Before English spelling became standardized over the last few hundred years, spelling variations in names were a common occurrence. As the English language changed in the Middle Ages, absorbing pieces of Latin and French, as well as other languages, the spelling of people's names also changed considerably, even over a single lifetime. Many variations of the name Inglett have been found, including Inglett, Inglet, Inglott, Ingot and others.

Distinguished members of the family include William Inglott (1554-1621), English musician who "became organist of Norwich Cathedral. He was noted for his skill as a player on the organ and virginals. His name appears as a composer in the manuscript volume (Fitzwilliam Museum, Cambridge) known as ‘Queen Elizabeth's Virginal Book,’ but none of his works are now known. He died at Norwich in December 1621, and was buried in the cathedral, where a monument was...
Another 74 words (5 lines of text) are included under the topic Early Inglett Notables in all our PDF Extended History products and printed products wherever possible.

Migration of the Inglett family

In an attempt to escape the chaos experienced in England, many English families boarded overcrowded and diseased ships sailing for the shores of North America and other British colonies. Those families hardy enough, and lucky enough, to make the passage intact were rewarded with land and a social environment less prone to religious and political persecution. Many of these families became important contributors to the young colonies in which they settled. Early immigration and passenger lists have documented some of the first Ingletts to arrive on North American shores: members who sailed to North America during the 17th, 18th and 19th centuries.