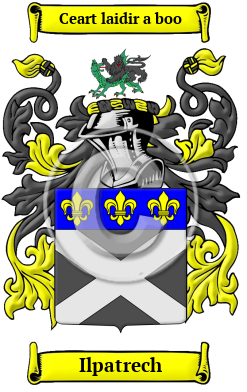 Most of the old Irish surnames that can be found throughout the world today have their roots in the Gaelic language. The original Gaelic form of the name Ilpatrech is Mac Giolla Phadraig, denoting a devotee of St. Patrick. This is the only native-Irish surname with the prefix "Fitz", as all others descend from the Normans.[1]

Early Origins of the Ilpatrech family

The surname Ilpatrech was first found in Ossory (Irish: Osraige), the former Kingdom of Ossory, now county Kilkenny, located in Southeastern Ireland in the province of Leinster, where they were the traditional Princes of Ossary, claiming descent from the O'Connors [2] and Giolla Padraig, a warlike chief in Ossary who lived in the second half of the 10th century. [1]

Early History of the Ilpatrech family

The search for the origins of the name Ilpatrech family name revealed numerous spelling variations. These variants can be somewhat accounted for when it is realized that before widespread literacy people only recognized their name by pronunciation; it was up to scribes to decide how it was to be formally recorded. Variations found include Fitzpatrick, Fitzpatricks, Kilpatrick, Shera, Sherar, Sherra, Patchy, Patchie, Parogan, Parrican, Fitz, MacGilpatrick, McGilpatrick, MacIlpatrick, McIlpatrick, MacSherra, McSherra, McShera, MacShera, Sheera, McSheera and many more.

Notable amongst the family name at this time was Sir Barnaby Fitzpatrick, (1535?-1581), one of the first to submit to Henry VII and was knighted for his allegiance in 1558. He was the son and heir of Brian Fitzpatrick or MacGillapatrick, first lord...
Another 43 words (3 lines of text) are included under the topic Early Ilpatrech Notables in all our PDF Extended History products and printed products wherever possible.

Migration of the Ilpatrech family

Ireland saw an enormous decrease in its population in the 19th century due to immigration and death. This pattern of immigration began slowly in the late 18th century and gradually grew throughout the early portion of the 19th century. However, a dramatic increase in the country's immigration numbers occurred when the Great Potato Famine struck in the 1840s. The early immigrants to North America were primarily destined to be farmers tending to their own plot of land, those that came later initially settled within pre-established urban centers. These urban immigrants provided the cheap labor that the fast developing United States and soon to be Canada required. Regardless of their new lifestyle in North America, the Irish immigrants to the United States and Canada made invaluable contributions to their newly adopted societies. An investigation of immigrant and passenger lists revealed many Ilpatrechs: John and Edward Fitzpatrick who landed in Virginia in 1774; William Fitzpatrick settled in New York in 1817; Betty Fitzpatrick settled in Charlestown Massachusetts in 1803.