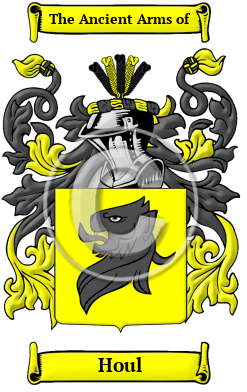 Early Origins of the Houl family

The surname Houl was first found in Brittany where they held a family seat in the honor of the seigneurie of Kermossonet.

"The name of Houel or Hoel is of Breton origin, as was at first, a personal denomination. The different branches of Houel, whose cradle was in the parish of Tourneur, near the town of Vire, probably had for their ancestor Breton emigrants, who established himself in this fief, of which his first descendants bore the name. In fact, we find in some of the lists of the Conquest the name of Houel, replaced in others by that of Sire de Tourneur." [1]

"The descendants of the Norman Houell were seated in the counties of Norfolk and Suffolk, at Hillington in the former and at Ashfield in the latter. One of them, Richard Hovell, squire of the body to Henry V., was ancestor of the family of Hovell." [2]

Early History of the Houl family

This web page shows only a small excerpt of our Houl research. Another 106 words (8 lines of text) covering the years 109 and 1096 are included under the topic Early Houl History in all our PDF Extended History products and printed products wherever possible.

More information is included under the topic Early Houl Notables in all our PDF Extended History products and printed products wherever possible.

Houl Settlers in New Zealand in the 19th Century