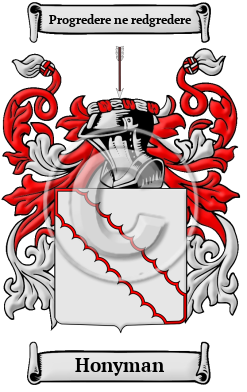 The descendants of the clans of the ancient Scottish tribe known as the Picts were the first to use the name Honyman. It was a name for a beekeeper. This occupation was important during the Middle Ages; since sugar was unknown in Europe, honey was the only available sweetener to be used in food preparation. Honey was also vital in the production of mead, a popular beverage.

Early Origins of the Honyman family

The surname Honyman was first found in Fife, where they held a family seat from early times, where it is said, within the family, "we all belong to Fife." Although this is largely true, deriving themselves from Falkland to St. Andrews, the name branched in early times to both Ayrshire and north to the Orkneys.

Early History of the Honyman family

Another 38 words (3 lines of text) are included under the topic Early Honyman Notables in all our PDF Extended History products and printed products wherever possible.

Honyman migration to the United States +

In those unstable times, many had no choice but to leave their beloved homelands. Sickness and poverty hounded travelers to North America, but those who made it were welcomed with land and opportunity. These settlers gave the young nations of Canada and the United States a strong backbone as they stood up for their beliefs as United Empire Loyalists and in the American War of Independence. In this century, the ancestors of these brave Scots have begun to recover their illustrious heritage through Clan societies and other heritage organizations. Early passenger and immigration lists reveal many Scottish settlers bearing the name Honyman:

Honyman Settlers in United States in the 18th Century