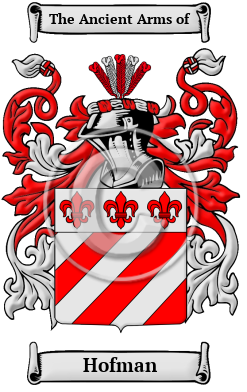 The German state of Silesia is the glorious birthplace of the distinguished surname Hofman. This name is derived from the German word "hof" meaning "settlement" or "farm" and "mann" meaning "man." The name may have originally been born by someone who owned their land as opposed to working someone else's land, or perhaps by the manager, or steward of such an estate.

Early Origins of the Hofman family

The surname Hofman was first found in Silesia, where the family became noted for its many branches within the region. Ancient chronicles first mention Otten Buzwoys Hoveman of Liegnitz, Silesia (1383,) Hans Kosche Hoffman of Liegnitz (1558,) and Nickel Hofeman the belt-maker of Goerlitz (1425).

Early History of the Hofman family

Notables of the period with the surname Hofman were Christian Hoffmann von Hoffmannswaldau (1616-1679), a German poet of the Baroque era; Pieter Hofman (1640-1692), a Flemish Baroque painter; Martin Hoffmann (1653-1719) a German luthier, based in Leipzig; and his son, Johann Christian Hoffmann (1683-1750)...
Another 43 words (3 lines of text) are included under the topic Early Hofman Notables in all our PDF Extended History products and printed products wherever possible.

Hofman migration to the United States +

Hofman Settlers in United States in the 17th Century

Hofman Settlers in United States in the 18th Century

Hofman Settlers in United States in the 19th Century

Suggested Readings for the name Hofman +