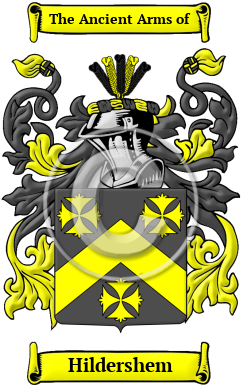 Early Origins of the Hildershem family

The surname Hildershem was first found in Cambridgeshire at Hildersham, a small village 8 miles south-east of Cambridge. Historically a parish, in the union of Linton, hundred of Chilford, this place formerly belonged to the De Veres, earls of Oxford, who were lords of the manor. A Roman road leading from the station near Cambridge to Colchester bounds the parish and can still be clearly seen today. [1]

Early History of the Hildershem family

It is only in the last few hundred years that the English language has been standardized. For that reason, early Anglo-Saxon surnames like Hildershem are characterized by many spelling variations. As the English language changed and incorporated elements of other European languages, even literate people changed the spelling of their names. Scribes and monks in the Middle Ages spelled names they sounded, so it is common to find several variations that refer to a single person. The variations of the name Hildershem include: Hildersham, Hildershaw, Hilderham, Hildershaw, Hillersham, Hillershaw, Hildersam, Hildersem and many more.

Distinguished members of the family include Arthur Hildersham or Hildersam (1563-1632), English Puritan divine, son of Thomas Hildersam, by his second wife, Anne Pole, born at Stetchworth, Cambridgeshire, on 6 October 1563. "He was of royal descent through his mother, a daughter of Sir Geoffrey Pole, brother to Cardinal Pole. His parents, who were zealous Roman Catholics, designed him for the priesthood; but in preparation for the university he was sent to the grammar school of Saffron Walden, Essex, where Desborough, the master, grounded him in Protestant principles. In 1576 he was entered at Christ's College, Cambridge. Two years later his...
Another 159 words (11 lines of text) are included under the topic Early Hildershem Notables in all our PDF Extended History products and printed products wherever possible.

Migration of the Hildershem family

Many English families tired of political and religious strife left Britain for the new colonies in North America. Although the trip itself offered no relief - conditions on the ships were extremely cramped, and many travelers arrived diseased, starving, and destitute - these immigrants believed the opportunities that awaited them were worth the risks. Once in the colonies, many of the families did indeed prosper and, in turn, made significant contributions to the culture and economies of the growing colonies. An inquiry into the early roots of North American families has revealed a number of immigrants bearing the name Hildershem or a variant listed above: the name represented in many forms and recorded from the mid 17th century in the great migration from Europe. Migrants settled in the eastern seaboard from Newfoundland, to Maine, to Virginia, the Carolinas, and to the islands..