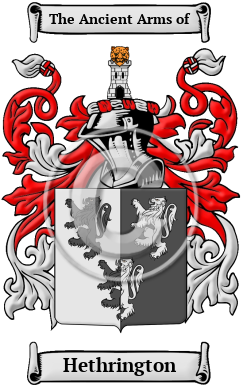 The surname Hethrington is a name whose history on English soil dates back to the wave of migration that followed the Norman Conquest of England of 1066. The Hethrington family lived in Hetherington in Northumberland. The "E" prefix, as in the name Etherington, is a shortened form of the name and has the same phonetic sound. [1]

Early Origins of the Hethrington family

The surname Hethrington was first found in Northumberland at Hetherington. This ancient Saxon village was derived from the word "haeth", meaning a heath and "tun" a settlement, thus "the farm of the heath." [2]

Early History of the Hethrington family

This web page shows only a small excerpt of our Hethrington research. Another 135 words (10 lines of text) covering the years 1100 and are included under the topic Early Hethrington History in all our PDF Extended History products and printed products wherever possible.

More information is included under the topic Early Hethrington Notables in all our PDF Extended History products and printed products wherever possible.

Migration of the Hethrington family to Ireland

Some of the Hethrington family moved to Ireland, but this topic is not covered in this excerpt.
Another 107 words (8 lines of text) about their life in Ireland is included in all our PDF Extended History products and printed products wherever possible.

Hethrington migration to the United States +

Hethrington Settlers in United States in the 19th Century