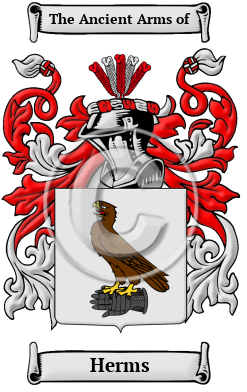 Early Origins of the Herms family

The surname Herms was first found in the lands of Hermiston (old Hirdemaneston) in the old barony of Lilliesleaf. There was another possible origin, that of the barony of Herdmanston in East Lothian, but the former Hermiston is more likely. [1]

One of the first records of the Herms family was Alexander de Hirdmanestun who witnessed a charter by Jocelin, Bishop of Glasgow confirming the grant of the church of Puloc to the church of Paisley c. 1177-99. In 1202 he also witnessed a charter of the land called Schotteschales in the territory of Lilliesleaf. Johan de Hirdmanston or Hirdmanestone of the county of Berewyke (Berwick) rendered homage to King Edward I of England in 1296. His seal bears a merlin perched on a gloved hand, and S' lohi's de Hirdmainston. Later "Alexander de Hirmanestone of the county of Rokesburk also rendered homage, and in 1305 he was juror on an inquisition made at Selkirk. Some years later the lands of Hermiston in Lilliesleaf seem to have passed from possession of the family to William de Stapilton in 1349. The surname was early carried to the north. Andrew Hiidmanniston, archdeacon of Caithness, witnessed the settlement of a controversy in 1328, and in the following year provision was made of a deanery of Moray to Master Andrew de Hirdmannstron." [1]

Early History of the Herms family

More information is included under the topic Early Herms Notables in all our PDF Extended History products and printed products wherever possible.

Herms migration to the United States +

Herms Settlers in United States in the 19th Century