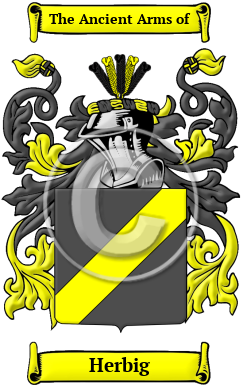 The ancient and distinguished German surname Herbig is patronymic in origin, deriving from the name of the father of the original bearer. The early German personal name Herwig means "battle-worthy," and was made popular through the "Gudrun Lied," a Middle High German epic poem written between 1220 and 1250 which featured a character named Herwig, the king of Zealand, Denmark. The name was common under many spelling variations in several areas of medieval Germany, such as Silesia (Harbig), Saxony (Herbig), and Swabia (Herweger).

Early Origins of the Herbig family

The surname Herbig was first found in northern Germany, where the name is thought to have first emerged. The earliest documentation of the name dates back to 1285, when Herwich kolere was recorded to be living in Stralsund in 1285. The name was first recorded as a surname in 1385, borne by Teml Herwich of Budweis. The young Herbig family was instrumental during this formative period, figuring prominently in the country's early history and contributing greatly to the development of medieval German society.

Early History of the Herbig family

Another 47 words (3 lines of text) are included under the topic Early Herbig Notables in all our PDF Extended History products and printed products wherever possible.

Herbig migration to the United States +

Herbig Settlers in United States in the 18th Century

Herbig Settlers in United States in the 19th Century