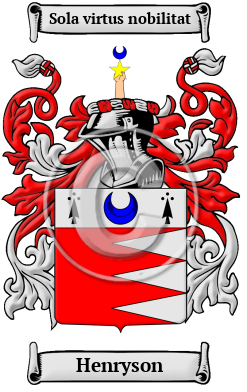 The ancestors of the first family to use the name Henryson lived among the Pictish people of ancient Scotland. The name Henryson is derived from the personal name Hendry, which is a chiefly Scottish derivative of the name Henry. There were two main branches of the Henryson family, one at Glencoe, in the lower Highlands, and one at Caithness, in the extreme north of Scotland.

Early Origins of the Henryson family

The surname Henryson was first found in Caithness, Glencoe, the Shetland Islands, Liddlesdale, and Fordell. One origin claims the Henryson family descend from Great Henry, son of King Nechtan, who was also the progenitor of the MacDonalds of Glencoe. However, the branch of the Henryson to whom this story relates also claim to have settled in the Glencoe territory many years before the Maclains or MacDonalds arrived there. This is consistent with the theory that this family are a branch of the northern family who moved south and became attached to the MacDonalds.

Early History of the Henryson family

The arts of spelling and translation were yet in their infancies when surnames began, so there are an enormous number of spelling variations of the names in early Scottish records. This is a particular problem with Scottish names because of the numerous times a name might have been loosely translated to English from Gaelic and back. Henryson has been spelled Henderson, Henreyson, Henryson, MacKendrick and many more.

Notable amongst the Clan at this time was James Henderson, of the Fordell line, who became Lord Advocate of Scotland in 1494. Perhaps the greatest Henderson of all was Alexander Henderson (c.1583-1646) of Fife, minister of Leuchars, who attended of St. Andrews University. In 1638, he drafted the National Covenant of Scotland, and is generally considered the "2nd founder," after Knox, of the Presbyterian church in Scotland. Robert Henryson (1430?-1506?) was a poet who flourished in Scotland in the period c. 1460-1500. He was...
Another 83 words (6 lines of text) are included under the topic Early Henryson Notables in all our PDF Extended History products and printed products wherever possible.

Migration of the Henryson family to Ireland

Some of the Henryson family moved to Ireland, but this topic is not covered in this excerpt.
Another 129 words (9 lines of text) about their life in Ireland is included in all our PDF Extended History products and printed products wherever possible.

Migration of the Henryson family

This oppression forced many Scots to leave their homelands. Most of these chose North America as their destination. Although the journey left many sick and poor, these immigrants were welcomed the hardy with great opportunity. Many of these settlers stood up for their newfound freedom in the American War of Independence. More recently, Scots abroad have recovered much of their collective heritage through highland games and other patriotic functions and groups. An examination of passenger and immigration lists has located various settlers bearing the name Henryson: Alex Henderson, who came to Virginia in 1650; Adry Henderson, who arrived in Virginia in 1669; Francis and William Henderson, who arrived in Barbados in 1680.