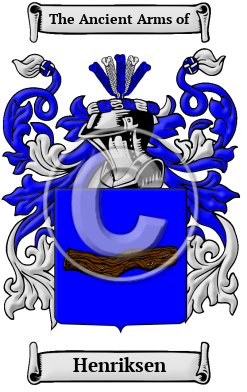 The name Henriksen comes from Prussia, a historic region that originally encompassed the coastal lands of the southeast Baltic, but over time expanded to include much of Poland and the majority of Germany. In pre-medieval times, these Prussians used only one name, but later they were forced by a growing population to adopt hereditary surnames so that they would remain distinct from the many others with the same first name. Local names were often chosen. They originally indicated land ownership, and frequently carried the prefix von, meaning "of" or "from", which is often taken as an indication of aristocratic lineage. Henriksen was a name for some one lived in many places throughout Prussia. The surname Henriksen was created from the widespread and popular Christian name Heinrich. According to some, the name comes from heim, and rich, meaning "ruler of the home."

Early Origins of the Henriksen family

The surname Henriksen was first found in Prussia, where the family contributed greatly to the development of an emerging nation and would later play a large role in the political conflicts of the area. The family branched into many houses, many of which acquired estates and manors throughout the surrounding regions, where they played significant roles in the social and political affairs. The name became popular from its use among many Germanic Emperors and nobles. Most noted among these were Heinrich I (der Vogler) and Heinrich II, both of whom are also holy figures. Others include Heinrich VII of Luxemburg and Prince Heinrich the Lion of Brunswick. Individual bearers of the family name first mentioned in ancient chronicles include Heinrich Heymrich of Kassel in 1368.

Early History of the Henriksen family

Many cultural groups lived in the German states in medieval times. Each had its own dialect and traditions, and unique variations of popular names. Low German, which is similar to contemporary Dutch, was spoken in Westphalia. German names are characterized by additions such as regional suffixes and phrases that tell something about the origin or background of its original bearer. Further contributing to the variation in German names was the fact that there were no spelling rules in medieval times: scribes recorded names according to their sound. The recorded spelling variations of Henriksen include Heinrich, Heinreich, Heinrick, Heinricke, Heinrichs, Heinritz, Heimrich, Heimreich, Heimrick, Heimricke, Heimrichs, Heimritz, Hinerich, Hinerick, Hinereich, Hinericke, Hinerichs, Hinreich, Hinrich, Hinrick, Hinricke, Hinrichs, Hinritz, Hennerich, Hennericks, Hennereich and many more.

More information is included under the topic Early Henriksen Notables in all our PDF Extended History products and printed products wherever possible.

In the United States, the name Henriksen is the 12,412nd most popular surname with an estimated 2,487 people with that name. [1]

Henriksen migration to the United States +

The state of Prussia was a great influence on the shape of modern Germany. After the Second World War, Prussia's land was divided among the Soviet Union, Poland, East Germany and West Germany and the state was abolished. Some Prussians remained in those countries after the war, while many others migrated to North America in search of a new start. Philadelphia was their primary point of entry to the United States, after which many of them moved on to Ohio, Texas, Illinois, California, New York, and Maryland. A large number of Prussians also migrated to Ontario and the prairie provinces as United Empire Loyalists. Analysis of immigration records has shown some of the first Henriksens to arrive in North America, and among them were:

Henriksen Settlers in United States in the 19th Century