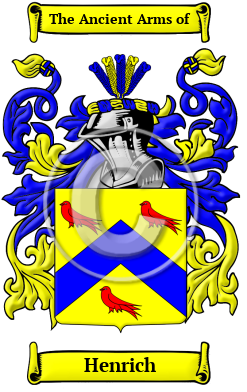 The name Henrich is tied to the ancient French culture that is at the heart of Western civilization. It comes from this particular name was devised in Brittany, in the northwest of the country. The Germanic personal name, Heinrich, which is composed of the elements "heim", which means "home", and "ric", which means "power".

Early Origins of the Henrich family

The surname Henrich was first found in Brittany (French: Bretagne, Breton: Breizh,) where the family stems from Vaurouil and de la Motte-Henry, villages in Saint-Gilles, to the west of Rennes, in the former barony of Gaël-Montfort.

Hamon Henry, a knight, was recorded in 1218. Hervé Henry, a knight, went on a crusade in 1248. In 1364, Olivier Henry, the lord of Vaurouil, fought in Airau. His son, Pierre, was a member of a record of Olivier de Clisson, in 1375. He married Céleste Madeuc and they had two sons: Guillaume, the father of the branch of Vaurouil, which became extinct in the 17th century, and Pierre, the lord of Boishélio, in Ploërmel, in 1407. Jean Henry, the grandson of Pierre, was a knight and the lord of Quengo, through his alliance with Marguerite du Quengo, around 1520. The branch founded by their youngest son, Julien, a general captain of the archers of the cathedral town of Vannes, affirmed his nobility status in 1669.

Louis-Bonaventure Henry, the count of Quengo (1659-1714), married Hélène Rolland des Aulnais, the lady of Villejan, in Allineuc, in 1682. They had three sons: Pierre, the count of Quengo and a battalion commander; Michel, the captain of the regiment at Béarn and a knight of Saint Louis; and Louis-Joseph, a knight of Kergoët, the lord of Hardouin (1689-1756). [1]

Early History of the Henrich family

The many different spellings of French surnames can be partially explained by the use of local dialects and by the influence of other languages during the early development of the French language. As a result of these linguistic and cultural influences, the name Henrich is distinguished by a number of regional variations. The many spelling variations of the name include Henry, Henri, Henrie, Henriette, Henriet, Henrion, Henriot, Henrich, Henrichet, Henrichon, Henrat, Henraux, Henrot, Henrotte, Henroutet, Henriquet and many more.

Notable amongst this name at this time was Denis (sometimes Didier) Henrion (died 1632 in Paris), a French mathematician who co-edited the works of Viète; Jacques Henri de Durfort, Duke of Duras (1625-1704), Marshal of France; Alphonse Henri de Lorraine (1648-1718), a member of the House of Lorraine and Count of Harcourt; Joseph Henry, a marine volunteer...
Another 56 words (4 lines of text) are included under the topic Early Henrich Notables in all our PDF Extended History products and printed products wherever possible.

In the United States, the name Henrich is the 18,183rd most popular surname with an estimated 2,487 people with that name. [2]

Henrich migration to the United States +

By 1643 there were only about 300 people in Quebec. Since immigration was slow, early marriage was desperately encouraged amongst the immigrants. The fur trade attracted migrants, both noble and commoner. 15,000 explorers left Montreal in the late 17th and 18th centuries. By 1675, there were 7000 French in Quebec. By the same year the Acadian presence in Nova Scotia, New Brunswick and Prince Edward Island had reached 500. In 1755, 10,000 French Acadians refused to take an oath of allegiance to England and were deported to Louisiana. The French founded Lower Canada, thus becoming one of the two great founding nations of Canada. The distinguished family name Henrich has made significant contributions to the culture, arts, sciences and religion of France and New France. Amongst the settlers in North America with this distinguished name Henrich were

Henrich Settlers in United States in the 18th Century

Henrich Settlers in United States in the 19th Century