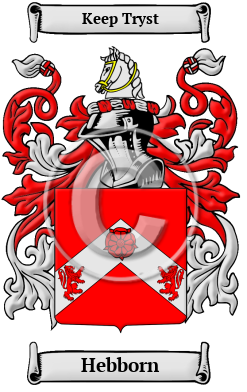 In the annals of British history, few names go farther back than Hebborn, which started among the people of the Boernician tribe. The first family to use the name Hebborn lived in Northumberland, in the village of Hebburn in the parish of Chillingham.

Early Origins of the Hebborn family

The surname Hebborn was first found in Northumberland at Hebburn, a township, in the parish of Chillingham, union of Glendale. "There are some remains of an ancient castle, built, and long occupied, by a family which took its name from the village." [1] Now part of the Tyne and Wear county, Hebburn dates back to about 1104-08 when it was first listed as Heabyrn. Literally the place name means "high burial place or tumulus," from the Old English words "heah" + "byrgen." [2] One of the first records of the name was Thomas de Heburn who was listed in the Assize Rolls of Northumberland in 1279. [3]

Early History of the Hebborn family

This web page shows only a small excerpt of our Hebborn research. Another 137 words (10 lines of text) covering the years 1279, 1329, 1550, 1660, 1563 and 1612 are included under the topic Early Hebborn History in all our PDF Extended History products and printed products wherever possible.

During the era when a person's name, tribe and posterity was one of his most important possessions, many different spellings were found in the archives examined. Hebborn occurred in many references, and spelling variations of the name found included Hepburn, Heyburn, Hepborne, Hepbourne, Hepbourn and others.

More information is included under the topic Early Hebborn Notables in all our PDF Extended History products and printed products wherever possible.

Migration of the Hebborn family to Ireland

Some of the Hebborn family moved to Ireland, but this topic is not covered in this excerpt.
Another 36 words (3 lines of text) about their life in Ireland is included in all our PDF Extended History products and printed products wherever possible.

Migration of the Hebborn family

Gradually becoming disenchanted with life in Ireland many of these uprooted families sailed aboard the armada of sailing ships known as the "White Sails" which plied the stormy Atlantic. These overcrowded ships often arrived with only 60 to 70% of their original passenger list, many dying of illness and the elements, were buried at sea. In North America, early immigrants bearing the family name Hebborn, or a spelling variation of the surname include: Thomas Hepburn, who settled in Baltimore in 1792; George Hepborne settled in Boston along with Anne, Rebecca, and Anna in 1635; Francis Hepbourne settled in Maryland in 1769..