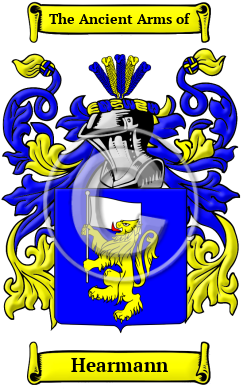 The distinguished surname Hearmann is of very ancient German origin. It is derived from a Germanic personal name made up of the elements "heri," meaning "army," and "man," meaning "man."

Early Origins of the Hearmann family

The surname Hearmann was first found in Prussia, where the name emerged in medieval times as one of the notable families of the region.

One of the first records of the family was Hermann ( fl. 1070), a hagiographer, probably a native of Lorraine, was the Archdeacon of Herfast, Bishop of Thetford, and helped him in his attempt to assert the jurisdiction of his see over St. Edmund's Abbey. [1]

Early History of the Hearmann family

Notable figures of the time with the name Hearmann were Jobst Herman of Lippe-Biesterfeld (1625-1678), Count of Lippe, Sternberg and Schwalenberg; Augustine Herman, First Lord of Bohemia Manor (c.1621-1686), a Bohemian explorer, merchant, and cartographer; Johann Oswald Harms (1643-1708), a German...
Another 40 words (3 lines of text) are included under the topic Early Hearmann Notables in all our PDF Extended History products and printed products wherever possible.

Migration of the Hearmann family