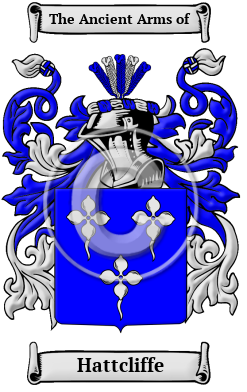 Early Origins of the Hattcliffe family

The surname Hattcliffe was first found in Lincolnshire at Hatcliffe, a parish, in the union of Caistor, 7½ miles south west from Grimsby; containing, with the hamlet of Gonerby.

Early History of the Hattcliffe family

Notable of this family during the Middle Ages was William Hatteclyffe (d. 1480), English physician and secretary to Edward IV, one of the original scholars of King's College, Cambridge, appointed by Henry VI on 12 Feb. 1440. Hatteclyffe was possibly a relative of another William Hatteclyffe (fl...
Another 46 words (3 lines of text) are included under the topic Early Hattcliffe Notables in all our PDF Extended History products and printed products wherever possible.

Migration of the Hattcliffe family

Some of the first immigrants to cross the Atlantic and come to North America carried the name Hattcliffe, or a variant listed above: the name represented in many forms and recorded from the mid 17th century in the great migration from Europe. Migrants settled in the eastern seaboard from Newfoundland, to Maine, to Virginia, the Carolinas, and to the islands..