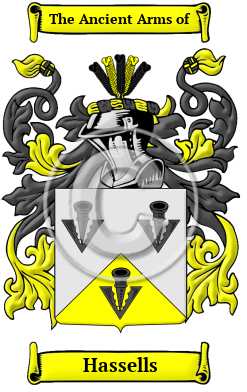 Early Origins of the Hassells family

The surname Hassells was first found in Cheshire at Hassall, a village and civil parish in the Borough of Cheshire East which dates back to at least the Domesday Book where it was listed as Etshale as land held by William Malbank. At that time it was part of the Middlewich Hundred and was land enough for two ploughs. [1] [2]

The place name literally means "the witch's nook of land" derived from the Old English haegtesse + halh. By the 13th century, the place name had evolved to be spelt Hatishale. [3]

Hassall Hall is a former manor house to the east of the village and dates from the 17th century. It was upgraded in the 19th century and has since been divided into two houses. Today, the buildings are designated by the English Heritage as a Grade II listed buildings. Hassall Green is a village in the civil parish of Betchton, near Hassall.

"The ancient family of Hassall or Hassell possessed the lordship of the manor of the name as far back as the reign of Edward II.; in later times a branch has established itself in Nantwich." [4]

The first record of the family was found in Oxfordshire in the Hundredorum Rolls of 1273, John de Hassett. It was not until 1299 when we find a Cheshire entry, that of Henry de Hasshal, there in 1299. [5]

Early History of the Hassells family

Anglo-Norman names tend to be marked by an enormous number of spelling variations. This is largely due to the fact that Old and Middle English lacked any spelling rules when Norman French was introduced in the 11th century. The languages of the English courts at that time were French and Latin. These various languages mixed quite freely in the evolving social milieu. The final element of this mix is that medieval scribes spelled words according to their sounds rather than any definite rules, so a name was often spelled in as many different ways as the number of documents it appeared in. The name was spelled Hassall, Hassel, Hassell, Hasell, Hasel, Hassal, Hassul and many more.

Outstanding amongst the family at this time was Edward Hassall or Halsall (fl. 1667), English Royalist, born about 1627, probably a member of an old family seated at Halsall, near Ormskirk, Lancashire. "He fought in the defence of Lathom House in 1644, and was wounded. Hassall, who attained the rank of major, was one of the four cavaliers who, on 5 June 1650, assassinated Anthony Ascham [q. v.] at Madrid (Cal. Clarendon State Papers, ii. 63, 220, 343). He was imprisoned there for four months, but in October was released, and went to England to act as a spy on the...
Another 171 words (12 lines of text) are included under the topic Early Hassells Notables in all our PDF Extended History products and printed products wherever possible.

Migration of the Hassells family

Because of the political and religious discontent in England, families began to migrate abroad in enormous numbers. Faced with persecution and starvation at home, the open frontiers and generally less oppressive social environment of the New World seemed tantalizing indeed to many English people. The trip was difficult, and not all made it unscathed, but many of those who did get to Canada and the United States made important contributions to the young nations in which they settled. Some of the first North American settlers with Hassells name or one of its variants: William Hassall, who came to Virginia in 1653; Jon Hassall, who was on record in Virginia in 1653; as well as James Hassall, who was recorded as a British Aliens in the United States during the War of 1812..