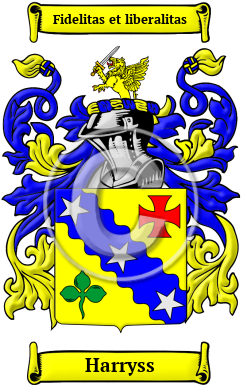 The name Harryss has a history dating as far back as the Norman Conquest of England in 1066 when the culture from which this family sprang arrived on British soil. It was a name for a person who was the son of the ruler of the property upon which he lived. Initially, le Herisse, the name came to England with the Norman Conquest, and is of Old French derivation. Another derivation, which is probably more common shows that the name is a version of the Old English given name Harry. Although both derivations are valid time has confused them and historians now disagree on which is appropriate in a given situation.

Early Origins of the Harryss family

The surname Harryss was first found in Derbyshire where they had been granted lands by William the Conqueror for their assistance at the Battle of Hastings in 1066 A.D.

Early History of the Harryss family

This web page shows only a small excerpt of our Harryss research. Another 208 words (15 lines of text) covering the years 1080, 1483, and 1600 are included under the topic Early Harryss History in all our PDF Extended History products and printed products wherever possible.

More information is included under the topic Early Harryss Notables in all our PDF Extended History products and printed products wherever possible.

Migration of the Harryss family to Ireland

Some of the Harryss family moved to Ireland, but this topic is not covered in this excerpt.
Another 67 words (5 lines of text) about their life in Ireland is included in all our PDF Extended History products and printed products wherever possible.

Migration of the Harryss family