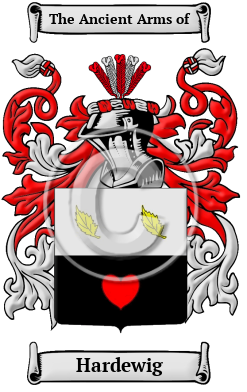 The surname Hardewig is patronymic in origin, derived from the first name of the father. In this case, Hardewig is associated with the popular German personal name Hartwig, meaning "hard-battle."

Early Origins of the Hardewig family

The surname Hardewig was first found in Hanover, where the name Hartwig became noted for its many branches within the region, each house acquiring a status and influence which was envied by the princes of the region. In their later history the name became a power unto themselves and were elevated to the ranks of nobility as they grew into this most influential family. Early mentions of the name Hardewig in historical records included Hertwig von Nostitz, who was recorded in Silesia in 1289, Johannes Hartwich, who was a town councillor in Immenhausen in 1359, and Vinzenz Hartweg, who was mentioned in the year 1534.

Early History of the Hardewig family

This web page shows only a small excerpt of our Hardewig research. Another 90 words (6 lines of text) covering the years 1786 and 1849 are included under the topic Early Hardewig History in all our PDF Extended History products and printed products wherever possible.

Notables of the time included Oscar Hertwig (1849-1922), German embryologist, who was the first person to demonstrate that fertilization was the fusion of the nuclei of two cells, the egg and the sperm...
Another 32 words (2 lines of text) are included under the topic Early Hardewig Notables in all our PDF Extended History products and printed products wherever possible.

Hardewig migration to the United States +

Hardewig Settlers in United States in the 19th Century