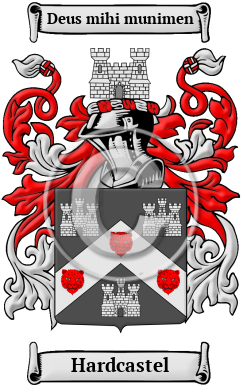 Early Origins of the Hardcastel family

The surname Hardcastel was first found in Yorkshire, but two noted authorities note that the name is probably derived from a geographical locality as in 'of Harden Castle.' "Must be, I think, a contraction of Harden Castle, the ancient residence of the Scotts of Harden, and a fine specimen to this day of a border fortress, in Roxburghshire." [1]

Bardsley agrees and adds "this is quite possible. It is found in Northumberland and Durham. I am strongly inclined to this view, but evidence is lacking, so far as my reading goes." [2]

Early History of the Hardcastel family

This web page shows only a small excerpt of our Hardcastel research. Another 67 words (5 lines of text) covering the years 1678, 1655, 1662, 1665, 1666 and 1670 are included under the topic Early Hardcastel History in all our PDF Extended History products and printed products wherever possible.

The name Hardcastel, appeared in many references, and from time to time, the surname was spelt Hardcastle, Harcastle, Hardcastell and others.

Notable amongst the family name during their early history was Thomas Hardcastle (d. 1678?), ejected minister, born at Berwick-upon-Holm, where he received his education under Jackson, a learned divine. He graduated B.A. at St. John's College in 1655. In 1662 he held the vicarage of Bramley in Yorkshire, and was ejected by the Act of Nonconformity. He suffered frequent imprisonment for his nonconformity, or...
Another 64 words (5 lines of text) are included under the topic Early Hardcastel Notables in all our PDF Extended History products and printed products wherever possible.

Migration of the Hardcastel family

The New World beckoned as many of the settlers in Ireland, known as the Scotch/Irish, became disenchanted. They sailed aboard the armada of sailing ships known as the "White Sails" which plied the stormy Atlantic. Some called them, less romantically, the "coffin ships." Amongst the early settlers who could be considered kinsmen of the Hardcastel family, or who bore a variation of the surname Hardcastel were Mathew Hardcastell who settled in Virginia in 1624; Samuel and Elizabeth Hardcastle arrived in Maryland in 1774; Mary Hardcastle arrived in Maryland in 1740..