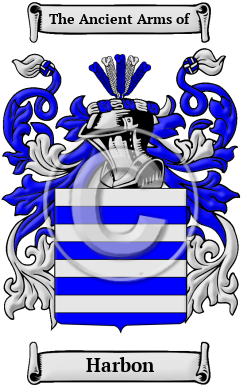 The origins of the name Harbon are with the Anglo-Saxon tribes of Britain. The name is derived from the name Rabin or Robin, which are pet forms of the personal name Robert. The name is preceded the Old English prefix har, which means gray. Hence, the surname Harbon literally means gray Rabin or gray Robin. [1]

Early Origins of the Harbon family

The surname Harbon was first found in the parish of Taxal, Derbyshire at Horobin. [2]

Early History of the Harbon family

The first dictionaries that appeared in the last few hundred years did much to standardize the English language. Before that time, spelling variations in names were a common occurrence. The language was changing, incorporating pieces of other languages, and the spelling of names changed with it. Harbon has been spelled many different ways, including Horrobin, Horrabin, Horobin, Horabin, Harrobin, Harrabin, Harobin, Harbin, Harbine, Harbyn, Harbynn, Horbyn and many more.

Another 42 words (3 lines of text) are included under the topic Early Harbon Notables in all our PDF Extended History products and printed products wherever possible.

Harbon Settlers in New Zealand in the 19th Century