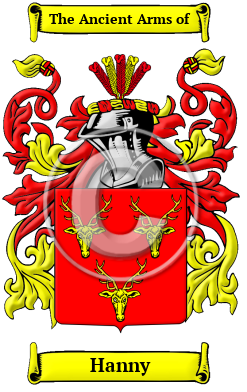 Early Origins of the Hanny family

The surname Hanny was first found in Yorkshire where "the pedigree begins with Sir William de Anne, Constable of the Castle of Tickhill in the time of Edward II." [1] Hunter states about this family: "it is a single instance of the male line being maintained in its ancient port and rank out of all gentry of the Deanery of Doncaster, summoned to appear before the Heralds in 1584."

The Hanney (Hanny) variant likely arose from East or West Hanney, the latter a parish in the union of Wantage, partly in the hundred of Ock, but chiefly in that of Wantage, Berkshire. Both are ancient Saxon villages dating back to 956 when they were collectively known as Hannige. By the time of the Domesday Book in 1086, they were known as Hannei, meaning "island, or land between streams, frequented by cocks (of wild birds)" from the Old English word "hana" + "eg." [2]

"The church [of West Hanney] is principally of Norman architecture, and contains a monument to Mrs. Elizabeth Bowles, who died at the advanced age of 124 years; likewise several memorials of Knights Templars." [3]

Thomas Hanney or De Hanneye (fl. 1313), is the author of a treatise, 'De quatuor partibus Grammaticæ,' known as the 'Memoriale Iuniorum,' which is extant in two manuscripts in the Bodleian Library. "There appears to be no evidence that the writer was an Englishman, but if he was he may be assumed to have taken his name from Hanney in Berkshire, not far from Wantage, which place is spelled Hanneye in a roll of 8 Edward II." [4]

Early History of the Hanny family

The first dictionaries that appeared in the last few hundred years did much to standardize the English language. Before that time, spelling variations in names were a common occurrence. The language was changing, incorporating pieces of other languages, and the spelling of names changed with it. Hanny has been spelled many different ways, including Anne, Any, Ann, Anny, Annie, Hanne, Hanny, Hanney and others.

More information is included under the topic Early Hanny Notables in all our PDF Extended History products and printed products wherever possible.

Hanny migration to the United States +

Thousands of English families in this era began to emigrate the New World in search of land and freedom from religious and political persecution. Although the passage was expensive and the ships were dark, crowded, and unsafe, those who made the voyage safely were rewarded with opportunities unavailable to them in their homeland. Research into passenger and immigration lists has revealed some of the very first Hannys to arrive in North America:

Hanny Settlers in United States in the 19th Century