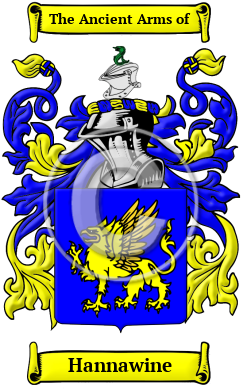 Early Origins of the Hannawine family

The surname Hannawine was first found in Louth and Armagh where they held a family seat from ancient times.The name Hannawine is derived from the Gaelic " hAnrachtaigh."

Early History of the Hannawine family

This web page shows only a small excerpt of our Hannawine research. Another 101 words (7 lines of text) covering the years 1019, 1161, 1107 and 1172 are included under the topic Early Hannawine History in all our PDF Extended History products and printed products wherever possible.

More information is included under the topic Early Hannawine Notables in all our PDF Extended History products and printed products wherever possible.

Migration of the Hannawine family

Some of the first settlers of this family name or some of its variants were: John Hanratty, who arrived at the port of New York in 1841; Pat, Margaret and their daughter Mary, who were recorded in St. John, New Brunswick in 1834.