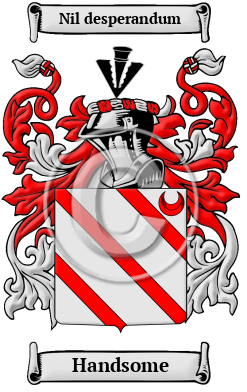 The surname Handsome is a baptismal name as in "the son of Anne", or the name could have been derived from one of the villages names North and South Anston in Yorkshire. Both villages date back to before the Domesday Book. They were listed there as Anestan and Litelanstan and were owned by Roger de Bully at that time. [1] In this case, the name Anston is thought to derive from the Old English ana + stan which meant "single or solitary stone." [2]

Early Origins of the Handsome family

The surname Handsome was first found in Lancashire. However, another branch of the family was found since early times at the township of Shugborough in Staffordshire. "The family of Anson have been seated in the county for many generations. William Anson, having purchased the manor in the reign of James I., made it his principal seat; and here in 1697, the distinguished admiral and circumnavigator, Lord George Anson, was born. He was raised to the peerage by the title of Lord Anson in 1747. The vale of Shugborough owes many of its beauties to the late Viscount Anson, father of the present peer, who was elevated to the rank of Earl of Lichfield in September 1831." [3]

Early History of the Handsome family

This web page shows only a small excerpt of our Handsome research. Another 61 words (4 lines of text) covering the years 1697, 1762, 1769, 1849, 1797, 1857 and 1857 are included under the topic Early Handsome History in all our PDF Extended History products and printed products wherever possible.

It is only in the last few hundred years that the English language has been standardized. For that reason, early Anglo-Saxon surnames like Handsome are characterized by many spelling variations. As the English language changed and incorporated elements of other European languages, even literate people changed the spelling of their names. The variations of the name Handsome include: Anson, Hanson, Ansen, Eanson, Ansin, L'Anson and others.

Notables of this surname at this time include: George Anson, 1st Baron Anson (1697-1762), English admiral, noted for his circumnavigation of the globe; General Sir George Anson (1769-1849)...
Another 27 words (2 lines of text) are included under the topic Early Handsome Notables in all our PDF Extended History products and printed products wherever possible.

Migration of the Handsome family

Many English families tired of political and religious strife left Britain for the new colonies in North America. Although the trip itself offered no relief - conditions on the ships were extremely cramped, and many travelers arrived diseased, starving, and destitute - these immigrants believed the opportunities that awaited them were worth the risks. Once in the colonies, many of the families did indeed prosper and, in turn, made significant contributions to the culture and economies of the growing colonies. An inquiry into the early roots of North American families has revealed a number of immigrants bearing the name Handsome or a variant listed above: Wm. Anson, who came to Virginia in 1678; Richard Anson, who came to Maryland in 1681; Andrew Anson, who settled in America in 1749; George Anson, age 21, who arrived in Maryland in 1775.