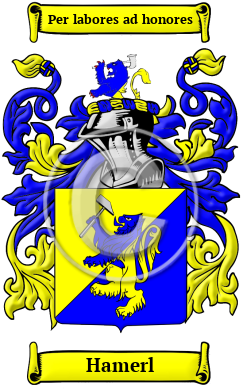 The ancestral home of the Hamerl family is in Austria, where the surname first emerged almost a millennium ago. The name Hamerl is a contraction of the German "Hammerschmied," meaning "blacksmith," and was most likely first borne by someone who held this occupation. Alternatively, the name may be derived from the place name "Hammel;" in this instance, the name would refer to someone hailing from the town of Hammel.

Early Origins of the Hamerl family

The surname Hamerl was first found in southern Germany and Austria, where the family became noted for its many branches throughout these regions. The first individual bearers of this name to be mentioned in ancient chronicles were "meister Hemer der smed [1]" of Breslau, Silesia, in 1356, Hensl Hemerl of Iglau, Bohemia, in 1425, Ulrich Hamerl of Prague in 1390, and Nicolas Hamer of Worms in 1317.

Early History of the Hamerl family

This web page shows only a small excerpt of our Hamerl research. Another 197 words (14 lines of text) covering the years 1791, 1820, and 1836 are included under the topic Early Hamerl History in all our PDF Extended History products and printed products wherever possible.

In the medieval era, many different cultural groups lived in the German states. There are thus many regional variations of German surnames from that era. Westphalians spoke Low German, which is similar to modern Dutch. Many German names carry suffixes that identify where they came from. Others have phrases attached that identify something about the original bearer. Other variations in German names resulted from the fact that medieval scribes worked without the aid of any spelling rules. The spelling variations of the name Hamerl include Hammer, Hammerer, Hamer, Hahmmer, Hahmer, Haammer, Haamer, Hammerer, Haemmerlein, Haemmerle, Hemmerle, Hammerl, Hamerl, Hemmerling, Hammerling, Hemerl, Hemer, Haemmer, Haemmerl and many more.

During this period prominent bearers of the name Hamerl were Baron Joseph von Hammer-Purgstall, who was a famous linguist and orientalist. He spent 50 years acquiring a vast library of the rarest and most valuable works of oriental...
Another 37 words (3 lines of text) are included under the topic Early Hamerl Notables in all our PDF Extended History products and printed products wherever possible.

Migration of the Hamerl family

Austria was made a republic after the First World War. The Austro-Hungarian Empire was broken up by the Treaty of Versailles and many of its people found themselves in the new nation of Czechoslovakia. Many other Austrians and expatriate Austrians made their way to North America in the 20th century. Most landed in Philadelphia, later continuing on to the states of Ohio, Texas, Illinois, California, New York, and Maryland. Some Austrian settlers also went to western Canada and Ontario. Research into the origins of individual families in North America revealed records of the immigration of a number of people bearing the name Hamerl or a variant listed above: Rinehart Hammer, who arrived in Philadelphia in 1729; Johann Georg Hammerer, who came to Philadelphia in 1770; as did Andreas Haemmerlein in 1848; Carl Ludwig Hamer, who settled in Texas in 1850.