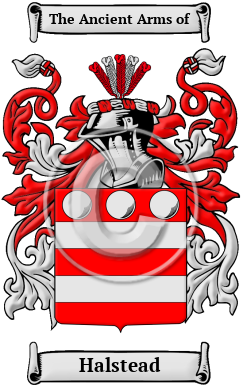 The ancestry of the name Halstead dates from the ancient Anglo-Saxon culture of Britain. It comes from when the family lived in Halstead, a place name found in Essex, Kent, and Leicestershire. The place name is derived from the Old English terms heald, which meant refuge or shelter, and stede, which meant place. The name as a whole means "place of shelter," and probably refers to a place which was well sheltered from the elements. The family name would have meant "dweller at a place of refuge." There is a second origin for this name, making it a polygenetic surname. It may also be occupational, referring to a "worker at the hall buildings," or a person who took care of livestock.

Early Origins of the Halstead family

The surname Halstead was first found in Essex where town and civil parish located in Braintree District. The Domesday Book offers two listing for the place Halstead. The first was listed as Haltesteda [1] in Essex, land held by William de Warenne and part of the Hundred of Hinckford. The land held 2 hides (land enough for two households) less 4 acres where 30 free men lived before the Conquest. Over in Leicestershire, the village Elstede [1] was listed in the same reference as land held by the King, part of Allexton and was 3 carucates of land, less 2 bovates; in other words much smaller than the Essex village. [2] To complicate things more, Halstead is a village and civil parish in the Sevenoaks District of Kent, but this village is not listed in the Domesday Book.

Early History of the Halstead family

This web page shows only a small excerpt of our Halstead research. Another 94 words (7 lines of text) covering the years 1181, 1794 and 1878 are included under the topic Early Halstead History in all our PDF Extended History products and printed products wherever possible.

Spelling variations in names were a common occurrence before English spelling was standardized a few hundred years ago. In the Middle Ages, even the literate spelled their names differently as the English language incorporated elements of French, Latin, and other European languages. Many variations of the name Halstead have been found, including Halstead, Halsted and others.

More information is included under the topic Early Halstead Notables in all our PDF Extended History products and printed products wherever possible.

In the United States, the name Halstead is the 4,230th most popular surname with an estimated 7,461 people with that name. [3]

Halstead migration to the United States +

Families began migrating abroad in enormous numbers because of the political and religious discontent in England. Often faced with persecution and starvation in England, the possibilities of the New World attracted many English people. Although the ocean trips took many lives, those who did get to North America were instrumental in building the necessary groundwork for what would become for new powerful nations. Some of the first immigrants to cross the Atlantic and come to North America bore the name Halstead, or a variant listed above:

Halstead Settlers in United States in the 18th Century

Halstead Settlers in United States in the 19th Century

Halstead Settlers in Australia in the 19th Century

Halstead Settlers in New Zealand in the 19th Century

Suggested Readings for the name Halstead +