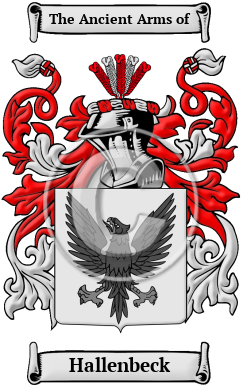 The roots of the distinguished German surname Hallenbeck lie in the former province of Silesia, now part of Poland. The name is derived from the personal name "Hallenbeck" or "Helmbrecht," which was made popular during the late 13th century through the Middle High German epic "Meier Helmbrecht" by Wernher der Gärtner in 1250, and means "son of Hellenbrecht." Alternatively, the name may also be derived from "Hembrecht," the name of a part of Frankfurt; in this case, the name would mean "one from Hembrecht."

Early Origins of the Hallenbeck family

The surname Hallenbeck was first found in various cities in Silesia, where the name is believed to have emerged. The earliest known bearer of the name was Zerdehnt Hellenbrecht, who lived in Breslau in 1254.

Early History of the Hallenbeck family

This web page shows only a small excerpt of our Hallenbeck research. Another 117 words (8 lines of text) covering the years 1254, 1349, 1365, 1454, 1564 and 1675 are included under the topic Early Hallenbeck History in all our PDF Extended History products and printed products wherever possible.

Another 34 words (2 lines of text) are included under the topic Early Hallenbeck Notables in all our PDF Extended History products and printed products wherever possible.

Hallenbeck migration to the United States +

Hallenbeck Settlers in United States in the 17th Century