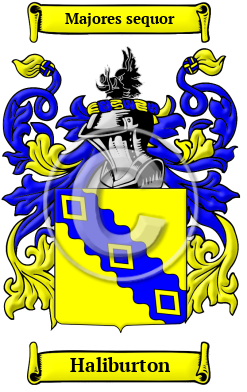 Early Origins of the Haliburton family

The surname Haliburton was first found in Dirleton, a parish, in the county of Haddington in East Lothian (formerly Berwickshire.) "The ancient manors of Golyn and Dirleton, which latter gives to the parish its present name, belonged, together with the lands of Fenton, in the early part of the twelfth century, to the family of Vaux or De Vallibus, and in 1340, passed, by marriage with the daughter and heiress of William De Vallibus, to Sir John Halyburton, whose grandson, Sir Walter, lord high treasurer of Scotland, was created Lord Halyburton in 1448. On the decease of the sixth lord Halyburton, the lands were conveyed by his daughter and heiress Janet, in marriage, to William, second lord Ruthven, by whose descendant, John, Earl of Gowrie, they were forfeited to the crown in 1600." [1]

"The principal old family of this name was Halyburton, of that Ilk, in the shire of Berwick. The Chappel of Halyburton was a pendicle of the church of Greenlaw. The family are mentioned so early as the reign of King Malcolm IV." [3]

Early History of the Haliburton family

In the United States, the name Haliburton is the 17,749th most popular surname with an estimated 2,487 people with that name. [4]

Haliburton migration to the United States +

The New World beckoned settlers from the Scottish-English borders. They sailed aboard the armada of sailing ships known as the "White Sails" which plied the stormy Atlantic. Some called them, less romantically, the "coffin ships." Among the early settlers bearing the Haliburton surname who came to North America were:

Haliburton Settlers in United States in the 18th Century

Haliburton Settlers in Canada in the 19th Century

Haliburton Settlers in Australia in the 19th Century

Haliburton Settlers in New Zealand in the 19th Century