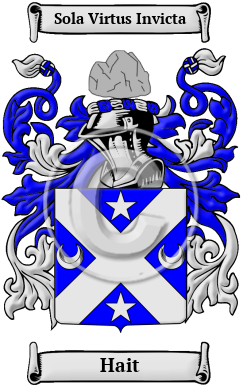 The distinguished and ancient surname Hait is Old English in origin, and traces its history back to the Middle Ages, when the island of Britain was inhabited by the Anglo-Saxons. The name is derived from the Old English "haga" or the Old Norse "hagi," which both mean "dweller by the haw." It is likely that the name was first borne by someone who lived near a hedged field or enclosure. Although now the name is pronounced as a single syllable, it was originally pronounced as two, as can be seen from the spelling “Hag-he”. Most likely, the second syllable was a hard “g” sound; the name was probably pronounced “hah-geh”.

Early Origins of the Hait family

The surname Hait was first found in Yorkshire, where Jollan de Hagh was recorded in 1229. The Scottish branch lived in Bemersyde for many centuries after their arrival in Scotland.

Early History of the Hait family

This web page shows only a small excerpt of our Hait research. Another 116 words (8 lines of text) covering the years 1800 and 1861 are included under the topic Early Hait History in all our PDF Extended History products and printed products wherever possible.

The name Hait, appeared in many references, and from time to time, the surname was spelt Haig, Haigh, Hague, Hait, Haight, Hate, Haga and others.

More information is included under the topic Early Hait Notables in all our PDF Extended History products and printed products wherever possible.

Hait migration to the United States +

The New World beckoned as many of the settlers in Ireland, known as the Scotch/Irish, became disenchanted. They sailed aboard the armada of sailing ships known as the "White Sails" which plied the stormy Atlantic. Some called them, less romantically, the "coffin ships." Amongst the early settlers who could be considered kinsmen of the Hait family, or who bore a variation of the surname Hait were

Hait Settlers in United States in the 19th Century

Hait Settlers in Canada in the 18th Century