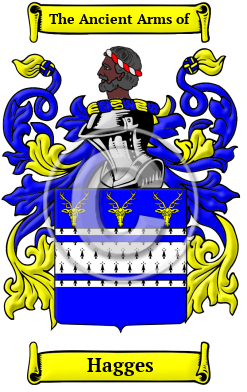 The surname Hagges is a name whose history on English soil dates back to the wave of migration that followed the Norman Conquest of England in 1066. The name Hagges comes from a the baptismal name for the son of Agace. As the naming tradition grew in Europe baptismal names began to be introduced in many countries. Baptismal names were sometimes given in honor of Christian saints and other biblical figures. There are very few Christian countries in Europe that did not adopt surnames from these religious figures.

Early Origins of the Hagges family

Further to the north in Scotland, the variant Haggis is of "local origin from Haggis, a common place name occurring in the shires of Berwick, Ayr, Lanark, Renfrew, Aberdeen, and Banff. " [2] And the first records of the family include: "Gilbert of Haggehouse, a Scots merchant, was arrested at Lynn in England without cause, 1394; and William Haggus [who] held land in the Almory of Abirbrothoc in 1427." [2]

Haggis is a savoury pudding and traditional Scottish dish. Thanks to Robert Burns' poem "Address to a Haggis" in 1787, the pudding is a favourite every Robbie Burn's Day where the poem is recited and the pudding is typically piped in with much ceremony.

Early History of the Hagges family

The first dictionaries that appeared in the last few hundred years did much to standardize the English language. Before that time, spelling variations in names were a common occurrence. The language was changing, incorporating pieces of other languages, and the spelling of names changed with it. Hagges has been spelled many different ways, including Haggas, Haggis, Hagis, Hagass, Haggist, Hagges, Hages, Hagus, Hagase, Aggas, Agas, Aggs, Agace, Agus and many more.

Distinguished members of the family include Robert Aggas, (d. 1679) an English painter, who was employed by Charles II as a scene-painter for the theatre in Dorset Garden. [3] Ralph Agas (1540-1621), was a land surveyor, who rose to eminence by making maps of London. He was a native of Stoke-by-Nayland, in Suffolk. [1] [3] Benjamin Agus (fl...
Another 55 words (4 lines of text) are included under the topic Early Hagges Notables in all our PDF Extended History products and printed products wherever possible.

Migration of the Hagges family

Thousands of English families in this era began to emigrate the New World in search of land and freedom from religious and political persecution. Although the passage was expensive and the ships were dark, crowded, and unsafe, those who made the voyage safely were rewarded with opportunities unavailable to them in their homeland. Research into passenger and immigration lists has revealed some of the very first Haggess to arrive in North America: Humphrey Haggist who settled in Virginia in 1654.