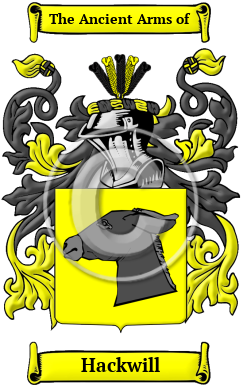 The name Hackwill is part of the ancient legacy of the Anglo-Saxon tribes of Britain. It is a product of when the family lived in Hawkwell, in Essex. The place-name Hawkwell first appeared in the Domesday Book as Hacuuella. Further research revealed that the name is derived from the Old English words haca, which meant "winding, wandering," and wella, which meant "spring" or "stream." As it is unlikely that a spring would wander, this place-name refers to a stream. Therefore, the surname Hackwill means "dweller by the winding stream." [1]

Early Origins of the Hackwill family

The surname Hackwill was first found in Essex, on the south-east coast of England, where Roger de Hakewell was the first record of the family in the Hundredorum Rolls of 1273. [2]

Early History of the Hackwill family

The first dictionaries that appeared in the last few hundred years did much to standardize the English language. Before that time, spelling variations in names were a common occurrence. The language was changing, incorporating pieces of other languages, and the spelling of names changed with it. Hackwill has been spelled many different ways, including Hackwell, Hackwill, Hakewell, Hakewill and others.

Distinguished members of the family include William Hakewill (1574-1655), an English legal antiquarian and MP, studied at Exeter College, Oxford. George Hakewill (1578-1649), was an English divine, and third son of John Hakewill, merchant, of Exeter, who married Thomazin, daughter of John Peryam; he was therefore a younger brother of William Hakewill. [3] William...
Another 51 words (4 lines of text) are included under the topic Early Hackwill Notables in all our PDF Extended History products and printed products wherever possible.

Hackwill Settlers in Australia in the 19th Century