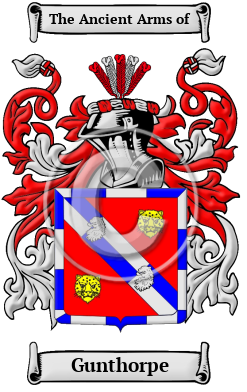 Early Origins of the Gunthorpe family

The surname Gunthorpe was first found in Northumberland where Yvo de Gunethorp was listed in the Curia Regis Rolls for 1207.

Early History of the Gunthorpe family

Notable amongst the family name during their early history was John Gunthorpe or Gundorp (died 1498), an English administrator, Keeper of the Privy Seal and Dean of Wells. He is "said to have been educated at Balliol College, and afterwards to have accompanied John Free to Italy, where he studied at Ferrara under Guarino of Verona (d. 1460), and became one of his most learned pupils. On returning to England Gunthorpe was...
Another 72 words (5 lines of text) are included under the topic Early Gunthorpe Notables in all our PDF Extended History products and printed products wherever possible.

Gunthorpe Settlers in Australia in the 19th Century