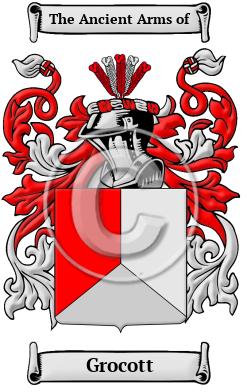 Early Origins of the Grocott family

The surname Grocott was first found in Worcestershire where the family was first referenced in the year 1275 when Margeria Groucok was listed as holding lands in the Subsidy Rolls at that time. William Grucock was listed in the Assize Rolls of Staffordshire in 1312. [1]

Early History of the Grocott family

Another 35 words (2 lines of text) are included under the topic Early Grocott Notables in all our PDF Extended History products and printed products wherever possible.

Grocott migration to the United States +

Grocott Settlers in United States in the 19th Century

Grocott Settlers in United States in the 20th Century

Grocott Settlers in Australia in the 19th Century