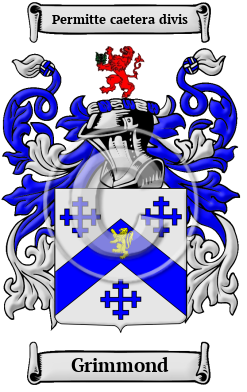 The rugged western mountains of Scotland's coastline and the Hebrides islands were home to the ancestors of the Grimmond family. Grimmond was originally a name for a person noted as a guardian. The name, which is Mac Cruimein in Gaelic, is derived from the Old Norse Hromund, which means famed protector. "The late Dr. Alexander Carmichael, who gives the Gaelic form of the name as Maccriomthain, says that a woman of the name in St. Kilda recited some of the island songs to him. " [1]

Interestingly, Crimond is a parish, in the district of Deer, county of Aberdeen. "This place once contained a castle belonging to the celebrated Cumyn, Earl of Buchan, which stood on a small hill called Castlehill, and was suffered to fall into ruins after his fatal defeat at the battle of Inverury by Robert Bruce. " [2]

Early Origins of the Grimmond family

The surname Grimmond was first found in on the Isle of Skye, where they were hereditary Pipers to the MacLeods of Dunvegan and founded the famous College of Piping, the most celebrated of its kind in the world.

"A family of the name were hereditary pipers to Macleod of Macleod, the last of whom, Lieut. MacCrimmon, had a farm in Glenelg in the first quarter of the nineteenth century. The name is found on one of the rune-inscribed crosses at Kirk Michael, Isle of Man, as Rumun. " [1]

Interestingly, Crimond is a parish, in the district of Deer, county of Aberdeen. "This place once contained a castle belonging to the celebrated Cumyn, Earl of Buchan, which stood on a small hill called Castlehill, and was suffered to fall into ruins after his fatal defeat at the battle of Inverury by Robert Bruce. " [2]

Early History of the Grimmond family

This web page shows only a small excerpt of our Grimmond research. Another 97 words (7 lines of text) covering the years 153 and 1533 are included under the topic Early Grimmond History in all our PDF Extended History products and printed products wherever possible.

Spelling variations are a very common occurrence in records of early Scottish names. They result from the repeated and inaccurate translations that many names went through in the course of various English occupations of Scotland. Grimmond has been spelled MacCrimmon, MacRimmon, MacCrummen, MacCrummin, Crimmon, Crimmons, Crimmin and many more.

More information is included under the topic Early Grimmond Notables in all our PDF Extended History products and printed products wherever possible.

Grimmond Settlers in Australia in the 19th Century

Grimmond Settlers in New Zealand in the 19th Century