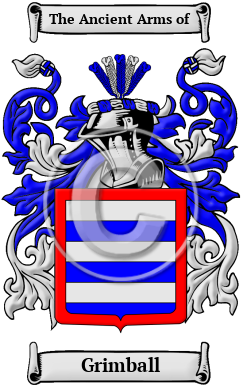 Early Origins of the Grimball family

The surname Grimball was first found in Staffordshire where the family name was first referenced in the year 1086 when Grimbaldus held a family seat in that shire. Saint Grimbald (Grimwald) (820?-903) was a Benedictine monk at the Abbey of Saint Bertin near Saint-Omer, France. He was invited by Alfred to England but declined the Diocese of Canterbury. His son, King Edward the Elder appointed him abbot of the New Minster at Winchester and he died in the year of its dedication. [1]

Early History of the Grimball family

Distinguished members of the family include Nicholas Grimald, Grimalde or Grimoald (1519-1562), English poet, born in Huntingdonshire in 1519, probably son of Giovanni Baptista Grimaldi, a clerk in...
Another 28 words (2 lines of text) are included under the topic Early Grimball Notables in all our PDF Extended History products and printed products wherever possible.

Grimball migration to the United States +

Grimball Settlers in United States in the 17th Century