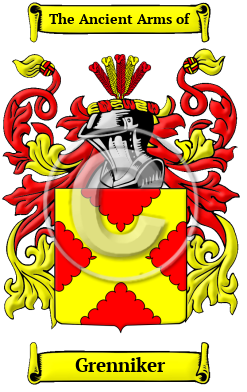 The local surname Grenniker was derived from the expression "of the green acre" or "green acres." Literally the name means "green field." [1]

Early Origins of the Grenniker family

The surname Grenniker was first found in Lancashire at Twiston, a township, in the chapelry of Downham, parish of Whalley, union of Clitheroe, Higher division of the hundred of Blackburn. "In the 1st of Edward III., when the Hall existed, the property was possessed by Richard de Greenacres; a successor of whom, Sir Richard Greenacres, left a daughter that married into the Worsley family, through whom the estate passed to the family of Starkie." [2]

In Scotland, the name was principally found in Aberdeen where it was originally from England. [4]

Early History of the Grenniker family

This web page shows only a small excerpt of our Grenniker research. Another 52 words (4 lines of text) covering the years 1564, 1564 and 1901 are included under the topic Early Grenniker History in all our PDF Extended History products and printed products wherever possible.

More information is included under the topic Early Grenniker Notables in all our PDF Extended History products and printed products wherever possible.

Migration of the Grenniker family