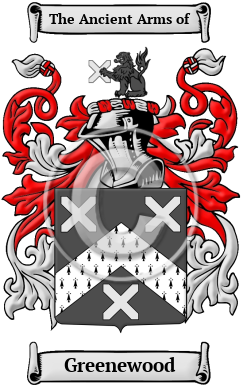 The surname Greenewood is a name of ancient Anglo-Saxon origin and comes from the Old English words meaning "green" and "wood." No doubt, the first family to bear this name lived in or near a dense forest or "whose abode was 'the merrie green-wood.' " [1]

Early Origins of the Greenewood family

The surname Greenewood was first found in Yorkshire where the name is "a well-known Yorkshire name. Of course other spots might give rise to the surname. But it is absolutely certain that some small spot between Huddersfield and Slaithwaite has given birth to the Greenwoods, who have ramified so marvelously in that county." [2]

Early History of the Greenewood family

Distinguished members of the family include John Greenwood (died 1593), an English clergyman and religious reformer, executed in 1593. "On 5 Dec. 1592 Greenwood and Johnson were arrested shortly after midnight at the house of Edward Boys in Fleet Street, and taken to the Counter in Wood Street, Cheapside, and in the morning the archbishop recommitted Greenwood to the Fleet. On 11 and 20 March Greenwood was examined, and confessed to the authorship of his books (Egerton Papers, pp. 171, 176). On 21 March Greenwood and Barrow were indicted, and two days later Sir...
Another 93 words (7 lines of text) are included under the topic Early Greenewood Notables in all our PDF Extended History products and printed products wherever possible.

Greenewood Settlers in West Indies in the 17th Century