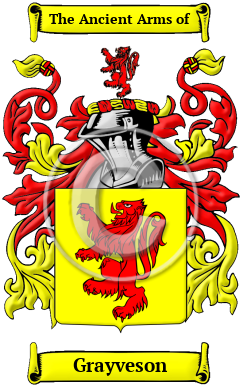 Early Origins of the Grayveson family

The surname Grayveson was first found in Yorkshire, where the first record of the family was Richard Grayveson who was listed as holding lands there in 1327. Nearby in Cumberland (Cumbria), John Graiveson was listed there in the Subsidy Rolls of 1332. Later the Yorkshire Poll Tax Rolls of 1379 included John Graveson and John Grayfson.

Early History of the Grayveson family

This web page shows only a small excerpt of our Grayveson research. Another 70 words (5 lines of text) covering the years 1327, 1332, 1381 and 1426 are included under the topic Early Grayveson History in all our PDF Extended History products and printed products wherever possible.

More information is included under the topic Early Grayveson Notables in all our PDF Extended History products and printed products wherever possible.

Migration of the Grayveson family