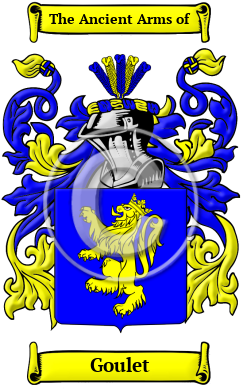 Early Origins of the Goulet family

The surname Goulet was first found in Brittany (French: Bretagne), where the family held a family seat in ancient times.

Members of the Goulaine family were the founders of churches in seventeen parishes between Nantes and Clisson. Marcis de Goulaine made a donation to Saint-Martin-de-Vertou, near the year 1120, of the tithes of the Chapelle-Heulin and Sainte-Radegonde-de-Goulaine. His two sons entered, thereby, into the Benedictine abbey as monks. Jean was count of Nantes in 1149 and Governor of Nantes in 1158. In 1248, a member of this family became a knight taking part in the crusades of the time. The family mansion was reconstructed in the 15th century.

Simon Goulart (1543-1628) was a scholar, a minister, a Protestant theologian, and the author of many works, such as "Petits mémoirs de la Ligue (1590-99)" and "Histoire de la guerre de Genève avec le duc de Savoie, de 1589," among many others. His son, Simon Goulart (1576-1628), was also a Protestant theologian. The family's nobility status was reaffirmed on April 13, 1669, on the proof of ten generations. This family increased its prominence, especially through alliances with other important families. Alphonse, marquis of Goulaine, married Charlotte de Béthune-Sully in 1867.

Jacques Goulet, born in 1615, son of Thomas and Antoinette (née Feillard), married Marguerite Mullier, born in 1631, daughter of Jean and Catherine (née Chauvin), at Poterie Orne, Perche, France on 21st November 1645. Later in the 17th century they travelled together to the New World and settled at the mill of M. Juchereau des Chatelets. Jacques passed away on 26th November 1688 and was buried at Ange-Gardien, Quebec. [1]

Early History of the Goulet family

This web page shows only a small excerpt of our Goulet research. Another 42 words (3 lines of text) covering the years 1728, 1799, 1742 and 1820 are included under the topic Early Goulet History in all our PDF Extended History products and printed products wherever possible.

Another 29 words (2 lines of text) are included under the topic Early Goulet Notables in all our PDF Extended History products and printed products wherever possible.

Goulet migration to the United States +

Goulet Settlers in United States in the 20th Century

Goulet Settlers in Canada in the 17th Century

Goulet Settlers in Canada in the 18th Century

Goulet Settlers in Canada in the 20th Century