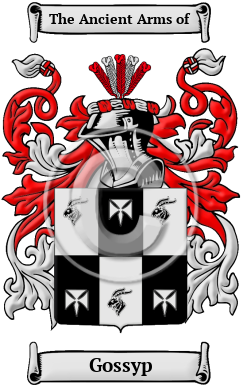 Early Origins of the Gossyp family

The surname Gossyp was first found in Staffordshire where the family name was first referenced in the year 1319 when John le Gossib or Gossyp held estates in that shire. The name means a person who is a god relative. At some point, some of the family moved to Thorp-Arch in the West Riding of Yorkshire. "This place derived the suffix to its name from the De Arch family, who came over with the Conqueror, and obtained large possessions in this part of the country. The parish is situated in the beautiful vale of the river Wharfe, and comprises 1,606a. 2r. 3p. of land, chiefly belonging to Randall Gossip, Esq., who is lord of the manor. Thorp-Arch Hall, the seat of Mr. Gossip, is a handsome mansion, commanding richly-diversified prospects." [1]

Early History of the Gossyp family

This web page shows only a small excerpt of our Gossyp research. Another 128 words (9 lines of text) covering the years 1379, 1455 and 1487 are included under the topic Early Gossyp History in all our PDF Extended History products and printed products wherever possible.

More information is included under the topic Early Gossyp Notables in all our PDF Extended History products and printed products wherever possible.

Migration of the Gossyp family