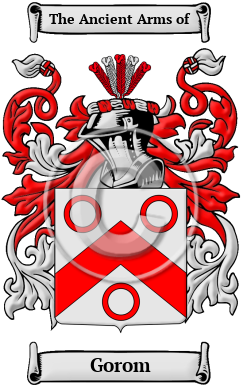 Gorom is a name of ancient Norman origin. It arrived in England with the Norman Conquest of 1066. The Gorom family lived in the places named Goring in Oxfordshire and Sussex. The place-name was originally derived from the Old English word Garingas, which means people of Gara. This name is a short form of various compound names with the first portion gar, which means spear.

Early Origins of the Gorom family

The surname Gorom was first found in Sussex at Goring, where at the time of the Domesday Book was part of the earldom of Arundel. [1] "The name is derived from Goring, in the rape [sub-division] of Arundel, where the family can be traced to John de Goring, living in the reign of Edward II. " [2]

So as to underscore the Sussex origin, another authority notes the name is from "a parish in Sussex where the ancestors of the baronet's family wore resident at an early period. John de Goring was lord before temp. Edward II." [3]

And another source wrote "Hugh Bygod was Lord of Garringes or Goring, Sussex, 13th cent. He was executor of the will of the Countess of Norfolk, 1248. John de Garringes, his son, had a daughter and heir, who married Henry Tregoz, M.P. for Sussex 1309. The bailsman of Henry T. was John Goring, probably nephew of John de Goring or Garringes. From the latter descended the family of De Goring, afterwards Lords Goring, Earls of Norwich, so distinguished in the Civil Wars 17th century, and the Baronets Goring. This family appears to be a younger branch of the Bygods Earls of Norfolk." [4]

"The Oxfordshire Goring occurs as Goringe in the 13th cent." [6]

Early History of the Gorom family

Endless spelling variations are a prevailing characteristic of Norman surnames. Old and Middle English lacked any definite spelling rules, and the introduction of Norman French added an unfamiliar ingredient to the English linguistic stew. French and Latin, the languages of the court, also influenced spellings. Finally, Medieval scribes generally spelled words according to how they sounded, so one person was often referred to by different spellings in different documents. The name has been spelled Goring, Gorring, Goringe, Gorringe, Goreing and many more.

Outstanding amongst the family at this time was George Goring, 1st Earl of Norwich (1585-1663), an English soldier and politician who sat in the House of Commons between 1621 and 1628; Charles Goring, 2nd Earl of Norwich (1615-1671), an English soldier and aristocrat; George Goring, Lord Goring (1608-1657), an English Royalist soldier; Sir William Goring (died 1658), the son of Sir...
Another 61 words (4 lines of text) are included under the topic Early Gorom Notables in all our PDF Extended History products and printed products wherever possible.

Migration of the Gorom family

To escape the political and religious persecution within England at the time, many English families left for the various British colonies abroad. The voyage was extremely difficult, though, and the cramped, dank ships caused many to arrive in the New World diseased and starving. But for those who made it, the trip was most often worth it. Many of the families who arrived went on to make valuable contributions to the emerging nations of Canada and the United States. An inquiry into the early roots of North American families reveals a number of immigrants bearing the name Gorom or a variant listed above: Joseph Gorring who settled in Baltimore, Maryland in 1820; Elizabeth Gorring settled in Virginia in 1677.