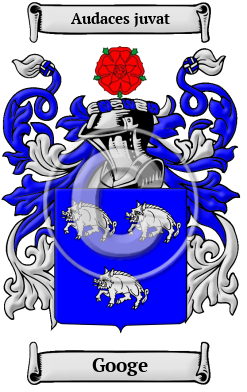 Early Origins of the Googe family

The surname Googe was first found in Roxburghshire. One of the first records of the name was found in France alluding to its Norman heritage: Martin Gouge (c. 1360-1444), a French chancellor.

Early History of the Googe family

Notable amongst the family name during their early history was Sir John Gooch of Suffolk; Barnabe Googe (1540-1594), an English poet and translator; William Gouge (1575-1653), an English clergyman and author, minister and preacher at St Ann Blackfriars, member of the Westminster Assembly from 1643; Sir William Gooch (1681-1751), 1st Baronet, born in Great Yarmouth, Norfolk, Governor of Virginia (1727-1749) responsible for the passage of the Tobacco Inspection Act of 1730, eponym of Goochland County, Virginia; Sir Thomas Gooch, 2nd Baronet (1674-1754), an English bishop, brother to Sir William. Barnabe Googe (1540-1594), was an English poet, son of Robert Googe, recorder of...
Another 115 words (8 lines of text) are included under the topic Early Googe Notables in all our PDF Extended History products and printed products wherever possible.

In the United States, the name Googe is the 15,502nd most popular surname with an estimated 2,487 people with that name. [2]

Migration of the Googe family