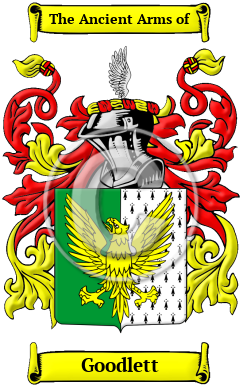 The Goodlett name comes from the Middle English words "gode," meaning "good," and "ladde," or "lad," meaning "a servant;" as such, it was likely originally a nickname for a trusted servant, which was later taken on as a surname.

Early Origins of the Goodlett family

Early History of the Goodlett family

Another 32 words (2 lines of text) are included under the topic Early Goodlett Notables in all our PDF Extended History products and printed products wherever possible.

Goodlett migration to the United States +

Goodlett Settlers in United States in the 19th Century