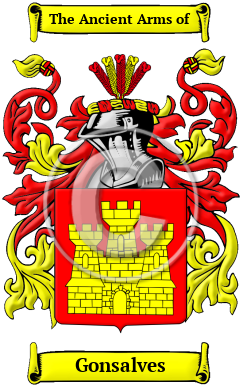 Early Origins of the Gonsalves family

The surname Gonsalves was first found in Castile, where the name originated in Visigothic times.

Early History of the Gonsalves family

Prominent among members of the family Francesco I Gonzaga (1366-1407), ruler of Mantua from 1382 to 1407, a condottiero, switched his allegiance to Venice (1391), also to protect his land from the increasing power of Gian Galeazzo Visconti, remembered as the builder of the Castle of San Giorgio, the nucleus of Ducal Palace of Mantua, the Gothic façade of the city cathedral, the bell tower of the Basilica of Sant'Andrea, as well as the Sanctuary of Santa Maria delle Grazie at Curtatone; Clara Gonzaga, Countess of Montpensier, Dauphine of Auvergne, Duchess of Sessa (1464-1503) was an Italian noblewoman of the House...
Another 133 words (10 lines of text) are included under the topic Early Gonsalves Notables in all our PDF Extended History products and printed products wherever possible.

In the United States, the name Gonsalves is the 4,421st most popular surname with an estimated 7,461 people with that name. [1]

Migration of the Gonsalves family

Some of the first settlers of this family name or some of its variants were: Alonso and Gil González de Avila, brothers who traveled with the conquistador Hernán Cortés to Mexico; Gil became Governor of the Yucatan. Another early emigrant was Martí.