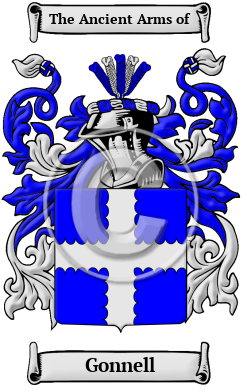 Early Origins of the Gonnell family

The surname Gonnell was first found in Normandy where "Gunwell, Gonville or Conteville, descended from Herluin, Lord of Conteville by his first marriage, the issue of which, Ralph de Conteville is stated by Orderic Vitalis to have had grants from the Conqueror in England. Accordingly in 1083 he appears holding lands in Somerset, his barony being held in Gloucester, and being held 1086 by his son Fitz-Ralph." [1] [2]

Early History of the Gonnell family

This web page shows only a small excerpt of our Gonnell research. Another 73 words (5 lines of text) covering the years 1165, 1172 and 1327 are included under the topic Early Gonnell History in all our PDF Extended History products and printed products wherever possible.

More information is included under the topic Early Gonnell Notables in all our PDF Extended History products and printed products wherever possible.

Gonnell migration to the United States +

Gonnell Settlers in United States in the 19th Century