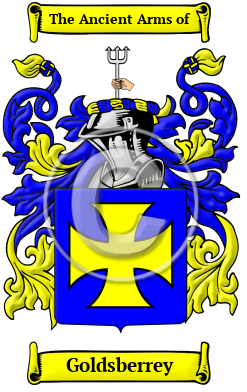 The origins of the Goldsberrey surname lie with the Anglo-Saxon tribes of Britain. The name Goldsberrey began when someone in that family worked as a goldsmith, or jeweller refiner or gilder. The surname Goldsberrey was also a nickname for someone with bright yellow hair which referred to gold.

Early Origins of the Goldsberrey family

The surname Goldsberrey was first found in Yorkshire at Goldsborough, a parish, in the Upper division of the wapentake of Claro, in the West Riding of Yorkshire. Goldsborough Hall, built in the reign of James I., is the property of the Earl of Harewood. [1]

Early History of the Goldsberrey family

One relatively recent invention that did much to standardize English spelling was the printing press. However, before its invention even the most literate people recorded their names according to sound rather than spelling. The spelling variations under which the name Goldsberrey has appeared include Goldesborough, Goldsbrough, Goldisbrough, Goldsborough and many more.

Notables of the family at this time include John Goldsburgh, of Godmanchester, Sheriff of Cambridgeshire and Huntingdonshire in 1626. Godfrey Goldsborough (1548-1604), was Bishop of Gloucester, born in 1548 in the town of Cambridge. On 28 Aug. 1598 he was elected bishop of Gloucester, and he was consecrated at Lambeth on 12 Nov. Before leaving London he made a will, dated 7 March 1691, wherein he described himself as 'of Bethnall Green, in the county of Middlesex, knight, being bound on a voyage to the East India beyond the seas in the shipp Berkly Castle'. Not long after his death his widow...
Another 156 words (11 lines of text) are included under the topic Early Goldsberrey Notables in all our PDF Extended History products and printed products wherever possible.

Migration of the Goldsberrey family

At this time, the shores of the New World beckoned many English families that felt that the social climate in England was oppressive and lacked opportunity for change. Thousands left England at great expense in ships that were overcrowded and full of disease. A great portion of these settlers never survived the journey and even a greater number arrived sick, starving, and without a penny. The survivors, however, were often greeted with greater opportunity than they could have experienced back home. These English settlers made significant contributions to those colonies that would eventually become the United States and Canada. An examination of early immigration records and passenger ship lists revealed that people bearing the name Goldsberrey arrived in North America very early: Thomas Goldsborough who settled in Jamaica in 1686; John Goldsborough settled in Maryland in 1774.