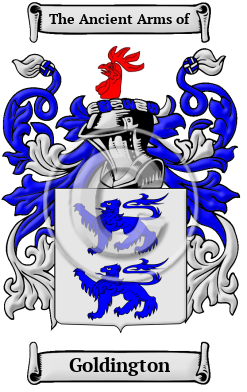 The Goldington surname is most likely derived from the name of the parish of Goldington, in county Bedford.

Early Origins of the Goldington family

The surname Goldington was first found in Bedfordshire (Old English: Bedanfordscir), located in Southeast-central England, formerly part of the Anglo-Saxon kingdom of Mercia. The surname is descended from the tenant of the lands of Goldington, a part of Bedford, held by Ivo Tailbois, as under tenant, from the Bishop of Lincoln who was recorded in the Domesday Book census of 1086. The parish of Stanstead St. Margaret's in the union of Ware in Hertfordshire was home to a branch of the family at early times. "A college, or chantry, for a master and four secular priests, was founded at Stanstead in 1315, by Sir William de Goldington, Knt., in consequence of the impoverishment of the tithes and rights of the church; but it was dissolved in 1431, from neglect, and misapplication of its revenue." [1]

Early History of the Goldington family

This web page shows only a small excerpt of our Goldington research. Another 89 words (6 lines of text) covering the years 1230, 1280 and 1306 are included under the topic Early Goldington History in all our PDF Extended History products and printed products wherever possible.

More information is included under the topic Early Goldington Notables in all our PDF Extended History products and printed products wherever possible.

Migration of the Goldington family

Some of the first settlers of this family name or some of its variants were: Many settlers were recorded from the mid 17th century in the great migration from Europe. Migrants settled in the eastern seaboard from Newfoundland, to Maine, to Florida, and to the islands..