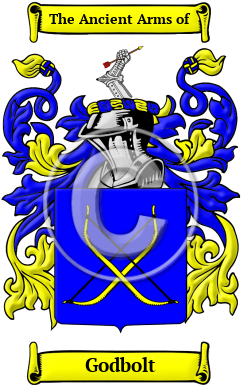 Early Origins of the Godbolt family

The surname Godbolt was first found in the Domesday Book of 1086 where Godeboldus was the first record of the family. [1]

Early History of the Godbolt family

Distinguished members of the family include Robert Goadby (1721-1778), English printer and compiler, of Sherborne, Dorsetshire. "He was an indefatigable bookmaker. His greatest production was the ‘Illustration of the Holy Scriptures,’ in three large folio volumes (1759). Goadby also compiled and printed a popular book entitled ‘The Christian's Instructor and Pocket Companion, extracted from the Holy Scriptures,’ which was approved by Bishop Sherlock. [3] John Godbolt (d. 1648), was an English judge from a family settled at Toddington, Suffolk. ". He was admitted a member of Barnard's Inn on 2 May, and of Gray's Inn 16 Nov., 1604, and was called to...
Another 105 words (8 lines of text) are included under the topic Early Godbolt Notables in all our PDF Extended History products and printed products wherever possible.

In the United States, the name Godbolt is the 14,900th most popular surname with an estimated 2,487 people with that name. [4]

Migration of the Godbolt family