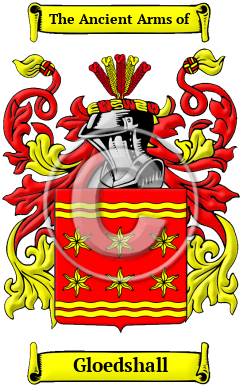 Early Origins of the Gloedshall family

The surname Gloedshall was first found in Warwickshire at Saltley, a hamlet, in the parish and union of Aston, Birmingham division of the hundred of Hemlingford. "In the time of Henry II. this place was called Saluthley, and belonged to the Rokebys. It was subsequently held by the family of Clodshale, who had their seat here, and one of whom received licence from Bishop Stretton in the 34th of Edward III. for an oratory or chapel at Saltley." [1]

Early History of the Gloedshall family

This web page shows only a small excerpt of our Gloedshall research. Another 144 words (10 lines of text) covering the years 1510, 1600, 1100, 1167, 1455 and 1487 are included under the topic Early Gloedshall History in all our PDF Extended History products and printed products wherever possible.

More information is included under the topic Early Gloedshall Notables in all our PDF Extended History products and printed products wherever possible.

Migration of the Gloedshall family